Reciprocal copy number variant (rCNV) of a segment of chromosome 16p11.2 (OMIM #611913) is one of the most significant recurrent genomic disorders. It has been associated with neurodevelopmental disorders (NDDs), including intellectual disability, autism spectrum disorder (ASD), schizophrenia, and obesity. The mechanism of NAHR-mediated CNV formation involves the mispairing of the flanking segmental duplications (SDs), resulting in either the loss or gain of the unique 593 kb genic segment, containing 25 protein-coding genes. However, the pathogenic mechanism, the functional relevance of individual genes within 16p11.2 RGD, and the combined contributions of multiple genes are unknown. 16p11.2 RGD is highly penetrant for NDDs, delineating the critical drivers of 16p11.2 RGD and the highly interconnected hub genes will shed light on disease pathogenesis and therapeutics.

rCNV of a 1.5Mb segment of chromosome 15q13.3 (OMIM #612001) is another common RGD and has been associated with NDDs including intellectual disability, autism spectrum disorder, schizophrenia, and attention deficit hyperactivity disorder. The pathogenic mechanism and the functional relevance of 15q13.3 genes (7 genes) are not known. To assess RGD-specific molecular and cellular signatures and gain novel insights into disease-relevant NDDs, we have generated isogenic CRISPR-engineered human neural stem cells and NGN2-induced neurons and performed transcriptomic profiling with the comparison of mouse models across three tissues cerebellum, prefrontal cortex, and striatum and neuron functional analysis.

Paternally inherited deletions of 15q11.2-q13 cause Prader-Willi syndrome (PWS), a distinct genomic disorder for which the causal genetic lesion has long-been established yet the mechanism that causes the disorder remains unclear. PWS involves the deletion of a sizeable segment on chromosome 15, which is uniquely vulnerable NAHR due to the presence of multiple SDs, leading to two major classes of deletion: Type I deletion (6 Mb), and Type II deletion (5.3 Mb). The critical feature contributing to PWS has multiple genomic components with varied degrees of association to phenotype; including  SNORD116 snoRNA gene cluster, the SNURF-SNRPN transcriptional complex and no other genomic features within the 15p11-q13 region, and the ipw region. To explore the causative genetic driver(s) of PWS, we are generating microdeletions in isogenic iPSC lines and reprogramming them into relevant cell lineages (e.g., hypothalamic neurons). We will define both the molecular and cellular consequences of PWS deletions and determine if they are attributable to an individual driver gene or the contribution of multiple genes through targeted CRISPR inactivation of candidate drivers. These genomic studies will lay the groundwork for testing whether targeted demethylation can ameliorate the aberrant gene expression and cellular phenotypes in this PWS model. 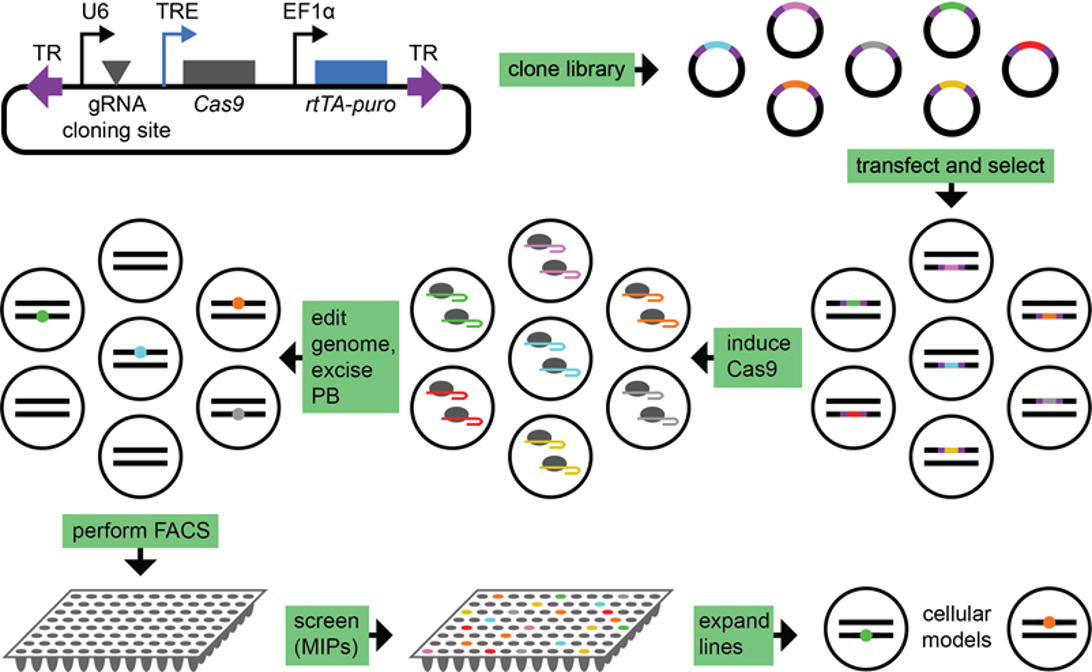 Large-scale human genomics studies over the past decade have uncovered a multitude of genetic variants associated with human disease. Despite our increasing knowledge of genetic contributors to several disorders, translation of these discoveries into effective treatments and therapies has been limited. In most cases, how specific variants disrupt cellular, tissue, and organ function remains largely unknown. To augment our understanding of mutational impacts and identify new opportunities for targeted therapeutic development, we integrate genome engineering and stem cell technologies to introduce mutations of interest into pluripotent cells, differentiate them into disease-relevant cell types, and characterize their properties. One major bottleneck in this workflow has been generating cellular models harboring specified mutations, a process that can take many months. We recently developed a novel system for scaling up our workflow, using the piggyBac transposon to deliver genome editing machinery and a guide RNA library to stem cells, enabling the production of dozens of cell lines containing specific mutations in a single experiment (Nuttle et al. bioRxiv 2020). This parallelized genome engineering platform promises to catalyze our functional genomics studies as well as broader efforts to create and characterize collections of mutational models for biological discovery and drug development.