In recent years, our lab and others as a part of large-scale consortiums identified many substantial risk factors as individual genes or copy number variations to neurodevelopmental disorders (NDDs) including Autism Spectrum Disorders (ASD).  Improving the understanding of the effects of genomic variations contributing to these diseases is a longstanding research interest in the lab. To address this, we integrate molecular and computational genomics approaches and generate 2D and 3D disease models by introducing disease-associated genomic variations, e.g., loss of function (Lof) mutations, copy number variations (CNVs) and Protein affecting variations (small insertions and deletions) using CRISPR/Cas9 gene-editing technology into induced pluripotent stem cells (hiPSC) models and reprogram them to neuron stem cells (NSCs), induced neurons (iNs) and brain organoids. We apply cutting edge genomics technologies, bulk or single-cell RNAseq, ChIPseq, HiC, 4C, and ATACseq to highlight a few of these models. The lab is also involved in developing novel molecular and computational approaches when required to uncover disease mechanisms by identifying dysregulated genes and networks of genes. We also aim to identify the convergent pathways and networks across models.

Over the last years, gene discovery studies in ASD have identified mutations in genes with regulatory functions as well as in genes involved in synaptic processes. The natural spatiotemporal expression patterns of many of these ASD implicated genes coalesce on subnetworks with distinct developmental trajectories. The next challenge lies in translating this data to biologically relevant molecular pathways to understand the underlying ASD disease mechanisms. In our laboratory we use iPSC-derived neuronal cells which enable us to measure the effects of early neurodevelopmental events on different types of functional neural cells in time. We use CRISPR genome engineering against two different isogenic backgrounds to disrupt synaptic and chromatin-associated genes commonly hit by rare de novo mutations in ASD, e.g. CHD8, SCN2A, AUTS2, FOXP1, POGZ. Characterization of the derivative neuronal models includes transcriptional and epigenetic profiling, as well as synaptic phenotyping, to identify points of molecular and functional convergence associated with these perturbations. We hypothesize that there is a convergent transcriptional signature in neuronal models of perturbations of functionally different ASD genes.

There is an emerging appreciation that the mechanisms governing gene regulation are reliant upon both the sequence that defines the genetic code and organization of this code in 3D space. Early glimpses into the intricacies of this architecture highlight the essentiality of chromatin order and folding for proper gene expression. In particular, structural variants (SV) that alter genome organization have the unique potential to create long-range positional effects, which form novel juxtapositions of genes and regulatory elements, while generating neighborhoods of distinct epigenetic modification. Most studies of ASD, and NDDs more broadly, have focused on mutations that directly disrupt genes, though such mutations explain just a small fraction of ASD cases. Our recent studies suggest that the functional implications of SVs beyond canonical copy number variants (CNVs), such as balanced chromosomal abnormalities (BCAs: inversions and translocations), propose novel pathogenic mechanisms that might underlie a component of NDD etiology. By overlaying 3D information with SV detection from whole-genome sequencing (WGS) followed by RNAseq, ATACseq, 4Cseq,  and Hi-C functional genomic characterization in CRISPR/Cas9 genome editing in iPS-derived neuronal models, we aim to interrogate the influence of genome organization on regulation of genes involved in human neural development. These analyses work to illuminate an indirect regulatory mechanism by which long-range chromatin interactions may define a novel mechanism underlying neurodevelopmental disorders (NDDs). 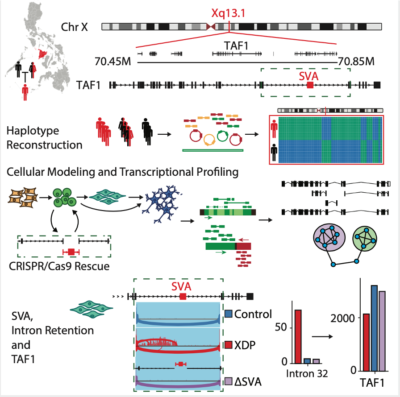 X-linked Dystonia-Parkinsonism (XDP) is a unique X-linked neurodegenerative disorder that is fully penetrant and lethal. The disorder is indigenous to the Philippines and represents a type of familial scourge, particularly on the Island of Panay. The onset of XDP occurs in males around the age 40 years and symptoms are temporally separated by dystonic and Parkinsonian phenotypes. While the causal haplotype was linked to a segment of the X-chromosome in a series of studies over 25 years ago, the causal variant and pathogenic mechanism was unknown. Talkowski Lab developed novel assembly-based functional genomics methods, integrated with induced-pluripotent stem cell (iPSC) derived neuronal models to explore the genomes and in vitro transcriptomes of XDP patients. These studies discovered the causal variant in XDP to be a novel noncoding sine-VNTR-alu (SVA) retrotransposition that inserted into intron 32 of TAF1, a critical gene involved in the TIID transcriptional complex. Transcriptome assembly revealed that this SVA resulted in aberrant splicing of exon 32-33 and anomalous intron retention (IR), with concomitant reduction of TAF1 expression. Remarkably, we were able to ameliorate this deficit by excising the SVA using CRISPR/Cas9 (Aneichyk et al., 2018, Cell). In a related study in my Co-Mentor Dr. Ozelius’s lab, we discovered that the hexameric repeat (CCCTCT)n of the SVA was unstable, and that the size of this repeat was strongly correlated with age-of-onset (AOO) of the disorder, reminiscent of the trinucleotide repeat expansion in Huntington’s disease (Bragg et al., 2017, PNAS). Thus, our collaborative team has likely solved the question of the causal variant in XDP, and is currently exploring the critical questions of functional mechanism, in vivo alterations in the XDP brain, and the potential for precision therapeutics. We expand this research endeavor to interrogate the in vivo molecular characteristics of XDP, including the hexameric repeat expansion and transcriptional changes associated with XDP using our recently established XDP post-mortem brain tissue collection in the Philippines. In collaboration with the industrial partner, we are also screening an anti-sense oligonucleotide (ASO) library to rescue the aberrant splicing observed in XDP.