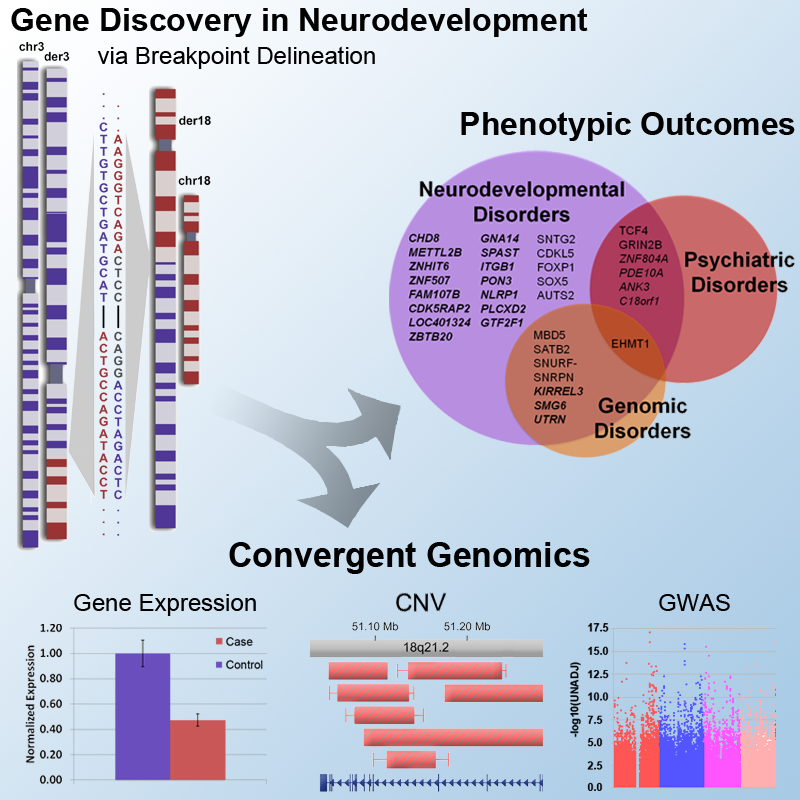 We have led genomics efforts to identify genes disrupted by genomic rearrangements, particularly balanced chromosomal abnormalities (BCAs). Our previous studies have performed structural variation to discovery genes associated with autism spectrum disorder (ASD), related neurodevelopmental disorders, and psychiatric disorders. The precise mapping of balanced chromosomal breakpoints has provided a remarkable yield of novel genes for which haploinsufficiency represents a significant causal factor for early onset neurodevelopmental abnormalities. Among the genes disrupted in cases with ASD and other neurodevelopmental disorders from our recent studies have included CHD8, MBD5, PHF21A, KIRREL3, NRXN1, GRIN2B, KDM6A, TCF4, SATB2, EHMT1, SNURF-SNRPN, CDK6, CTNND2, SOX5, PVRL3, and many others. In ongoing studies in the Simons Simplex Collection (SSC), which is a cohort of 2,700 families with children diagnosed with ASD, we are applying jumping libraries to identify the previously uncharacterized component of the disease etiology attributable to cryptic and complex structural alterations. Our results to date suggest that the landscape of balanced, cryptic, and complex structural variations is diverse in this cohort, and that their impact may be on a par with large CNVs in terms of their contributions to the genetic cause of ASD.

Recurrent and non-recurrent microdeletion and microduplication syndromes represent a major cause of human disease. In a series of studies over the last several years, we have developed a large consortium of CNV data from clinical diagnostic laboratories (>50,000 cases) and population based controls (>14,000). We have integrated these data with our BCA sequencing studies to identify individual gene disruptions that are necessary and sufficient to account for a portion of the phenotypic consequences observed in these regions. These studies, in collaboration with many others, have characterized genes such as MBD5, EHMT1, SNURF-SNRPN, KIRREL3, CHD8, CTNND2, and KCTD13 as strong effect loci in microdeletion or microduplication syndrome regions, some of which also demonstrate reciprocal dosage effects from duplication (MBD5, KCTD13). We continue to pursue this line of research across the genome in genome, transcriptome, and in vitro modeling studies.