Remarkable progress has been made in the last decade in defining the importance of structural variation in human disease, and these studies have predominantly focused on copy number variation (CNV). However, a glaring blind spot exists in basic research and clinical diagnostic testing in our ability to detect genomic rearrangements that do not involve the gain or loss of genomic material, also known as balanced structural variation: neither clinical dosage arrays, nor genome-wide association studies, nor whole-exome sequencing, nor low-depth whole genome sequencing have been capable of detecting balanced chromosomal aberrations (including translocations, inversions, and insertions) or small CNVs. Our lab has long focused on developing whole genome sequencing methods to delineate these previously intractable variants and determining their role in neurological disorders.

We initially developed methods to perform whole-genome sequencing using large-insert jumping libraries, enabling deep coverage of the genome with mapped inserts at an order of magnitude lower cost that the equivalent short-insert sequencing at the time. Our study was the first large scale efforts to define cytogenetic abnormalities at sequence resolution, uncovering unappreciated breakpoint complexity and, likely mechanisms of formation. The initial findings from these sequencing studies of de novo, cytogenetically detected balanced chromosomal abnormalities (BCAs) revealed a surprising abundance of complex chromosomal rearrangements among cytogenetically detected BCAs (~20% at sequence resolution compared to estimated 2.9% at cytogenetic resolution). We found that, in the viable human germline, complex rearrangements can involve multiple chromosomes and sometimes up to dozens of breakpoints. This was emphasized in our discovery of the apparent shattering and balanced reorganization of genomic segments (up to 26 in one case) in the germline of ASD subjects, similar to the phenomenon in cancer cells now dubbed chromothripsis. We have gone on to characterize over 150 cytogenetically detected BCAs, and our analyses to date have found that, remarkably, karyotypic interpretations rarely place both of the breakpoints to the proper cytogenetic sub-bands, suggesting a vital need for new, high resolution sequence-based cytogenetic methods. 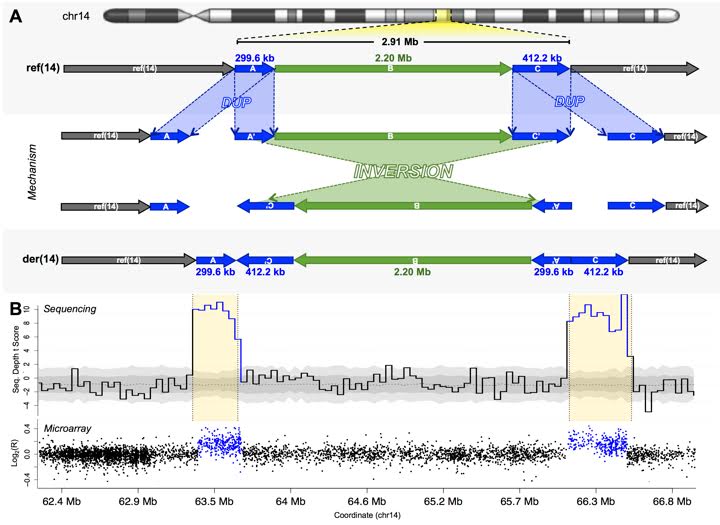 Following our initial studies characterizing structural variation detected by cytogenetic methods at sequence resolution, we have pursued the delineation of ‘cryptic’ classes of structural variation, or variants not detectable at cytogenetic resolution. In two recent studies, we have discovered that cryptic and complex rearrangements that are cryptic to cytogenetic methods represent a major component of all genomic structural variation. We have also delineated a new class of structural variation, two duplications in proximity that flank a cryptic inversion, which we denote as dupINVdup, that occur with striking frequency (~8% of all probands in one ASD cohort studied). We also find that a high proportion of duplications in the genome are misclassified by microarray and actually mark complex structural variants, and that, remarkably, only ~35-40% of the inversions in the human genome are simple, or canonical, inversions; the remainder harbor additional sequence complexity. These new findings are described in two recent publications from the lab, and each has significant implications for structural variation sequencing studies as well as clinical diagnostic testing by microarray.