The structural variations (SVs) in the non-coding region of 5q14.3 near a gene called MEF2C — a transcription factor, has been linked to neurodevelopmental disorders (NDDs). The paper, published in the American Journal of Human Genetics, is the first to describe the long-range effects of coding and non-coding MEF2C variants in human iPSCs derived neuronal cell lines, and that suggest both indirect and direct disruptions of the gene can have similar downstream effects. Six deletions were made for MEF2C as well as for other regulatory elements in the topologically associating domain (TAD) that includes MEF2C using CRISPR/cas9. Neuronal cells with a specific alteration in the proximal loop boundary in the non-coding DNA near MEF2C but not directly disrupting the gene have lower levels of the MEF2C protein. This SV which reduced the expression levels of MEF2C also lead to lower conduction of electrochemical signals in the neurons which are comparable to direct deletion of MEF2C gene. This suggests that different mechanisms of MEF2C loss can have same effects at the cellular level and similar contributions to NDDs. 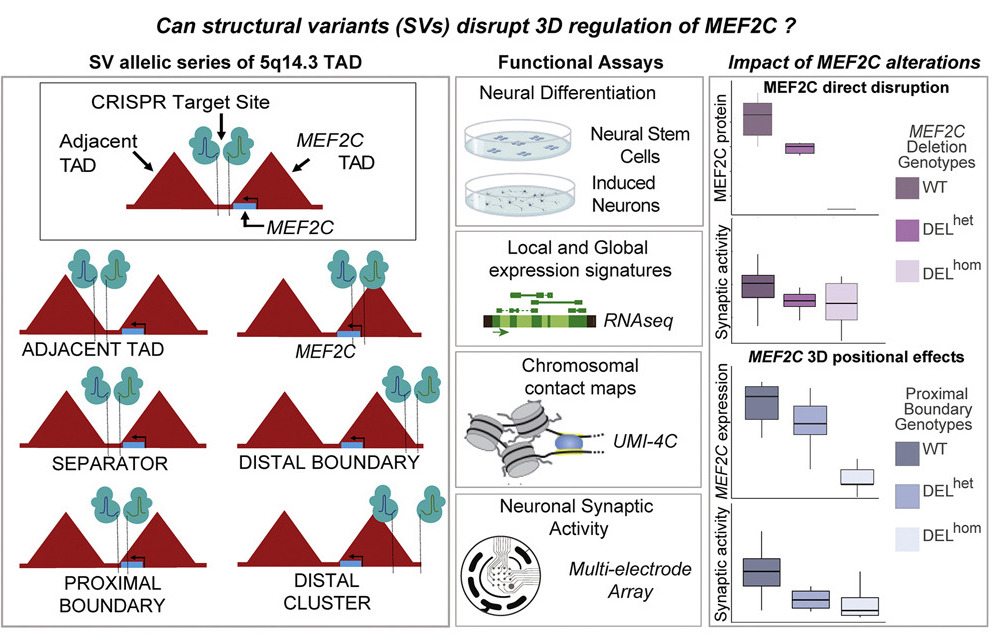 By Steph Hao|2022-10-31T15:35:41-04:00October 31st, 2022|Categories: Publication|Tags: MEF2C, Publication, sv|Comments Off on Transcriptional and functional consequences of alterations to MEF2C and its topological organization in neuronal models